Up early again for more birds, but this time on my own and I'd decided to stay local.  Leaving the hotel I couldn't find a cab so ended up walking through central Singapore with my bins and camera, working my way to my destination, a newish park called Gardens By The Bay.  This park is really, very Singapore - it's new, clean, and obviously very expensive.  A large area of reclaimed land by the water that has been immaculately landscaped with dense plantings, multiple water features, lots of sculpture, and some interesting restaurants and exhibits.  It's certainly not the wilderness, but there were a lot of birds there ..... 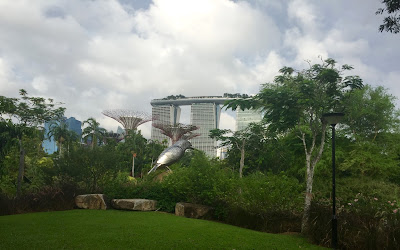 Singapore is quite literally stuffed with bird photographers.  They outnumber birders dozens to one, and most of the birding sites I'd visited that weekend were thick with them.  I'd heard that there were some good birds at the Gardens - a Black Bittern and some Wandering Whistling-Ducks - and so I wandered around the various ponds looking for them.  Then I rounded a corner and there were 30 photographers standing next to a lotus pond .... I guess I'd found the right place .... 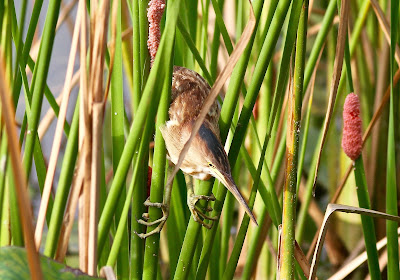 This particular lotus pond seemed to be bird-central at the park and perhaps as many as 50 photographers (but no birders) came and went while I spent a half hour there.  The Whistling-Ducks were in this pond along with 4 Yellow Bitterns, an Oriental Reed-Warbler and the Black Bittern even flew in for a quick visit.

While everyone seemed to be in that one area, I got itchy feet and decided to wander off to see if I could find more species.  Most things around the park were the local common species but I did find a Tiger Shrike (such a cool name for a bird) and some White-rumped Munias among other things.  I also saw a Peregrine Falcon which somehow seemed very out out place over a park in the tropics.  In total I saw 33 species, not bad for a park in the center of a major city.

Too soon though, it was time to leave.  I had to check out of the hotel and, after an epic lunch (Singapore is the most amazing food city with an epic fusion of Chinese, Malay, Indian, and Western influences) it was time to head to the airport for the next flight .... off to Hong Kong!