Slogging Through March in New York

The worst birding month of the year ....

So back from Asia to the huge anticlimax that is March in New York.  Late April and May are spectacular here but March, well March is blah.  Migration is starting to happen but we are still getting snow storms, the Winter birds are leaving, and the Summer birds are still few and far between  But still, we persevere ....

With little to chase, but just the earliest hints of migration underway, I focussed on what was available close to the apartment.  Checked Central Park Reservoir, hoping for a reported Horned Grebe, which surprisingly according to eBird would be new for my New York County list ..... but I dipped.  Then down to The Ramble where I did catch up with an Eastern Phoebe (year bird!) and a singing Rusty Blackbird. A tiny hint of Spring.

First to Bryant Park where I spent a very happy 20 minutes watching an American Woodcock (year bird!) toddling around in a bed of daffodils.  Quite simply one of my favorite species of bird in the world.

Then to Central Park where the Horned Grebe surrendered (New York County species number 200 - although I can think of a few more species I've seen that just never made it onto eBird).   Also added a Merlin which was both a year bird and a New York County bird.

Hard to get get motivated in March but I came up with a small list of potential year birds and set off to find them.  First stop was Jamaica Bay for the regular nesting Barn Owls.  When I arrived, I bumped into Ken Feustel who was clearly there for the same thing.

Working our way over to the 'Barn Owl Box' we settled down in the blind to see if the owls were planning to show.   Twenty minutes later they hadn't done so, but we knew they were in there so Ken took a risk and made (what was perhaps the lamest ever attempt at) a Barn Owl call.  And the Barn Owl popped it's head up and looked out of the box for a split second! Year bird!  But no photo ... 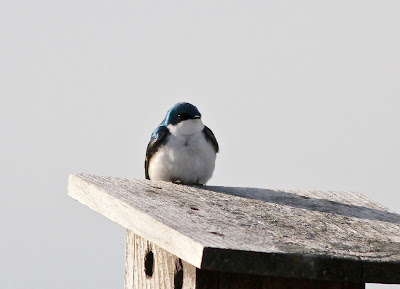 Next stop was Jones Beach where 26 newly paired American Oystercatchers and a single pair of Piping Plovers both joined the year list.  Then a tour of local saltmarshes until I was able to add a newly arrived Osprey as well.  Not the most exciting birding though, especially after the recent Asia trip so I soon gave up and came back to the City.  Roll on April ....