Not done yet - Tufted Duck on Long Island.

So after Saturday's drama with the LeConte's Sparrow, or the 'Great LeConte's Suppression Scandal" as I've come to call it, I figured the year was close to done.  I still hoped to get up North for a Hoary Redpoll, and perhaps (although it now seemed unlikely) offshore for a Northern Fulmar or an Atlantic Puffin.  Either way the universe of potential species had shrunk to perhaps 3 or 4 in my mind and I spent Sunday helping with the Sagaponac Christmas Bird Count in pouring rain, not expecting to see any more year birds locally for a while.

Come Monday though I got a slap in the face when word came in of not one, not two, but three potential year-birds right here on Long Island (!).  I was taking it easy on Monday morning and had several meetings to attend, albeit by phone, on Monday afternoon.  The weather was also lousy so it really didn't occur to me to go out birding and I figured, it being a week day, that there wouldn't be anyone out to find things.  Then, at around 10am I picked up a New York State Birds update from Andy Guthrie who had seen four (4!) species of alcid so far that morning from Montauk Point, among them a Black Guillemot (potential year bird #1).  So I raced over to Montauk, wondering if the weather was creating a freak alcid phenomenon and, when I got there at around 10:20am I heard (via text) about a Tufted Duck (potential year bird #2) in Western Suffolk County, and a Black Rail (potential year bird #3) not far away.  And I'd spent most of my morning sitting on the couch drinking coffee ….

Well, the rail wasn't exactly pinned down, and I worked out that I couldn't get to the duck and back home in time for my meeting, so I decided to stick with the Montauk plan and sea-watch.   I joined Andy Guthrie, Joe Giunta, and Peter Polshek for another 90-minute vigil at the concession stand (which has some shelter from the rain and wind) at Montauk Point.  Well, we didn't see any Guillemots, or any Murres or Dovekies for that matter, but we did see some Black-legged Kittiwakes, a lot of Razorbills, and later (at Montauk Inlet) a Black-headed Gull and a Kumlien's Gull.  Not a bad morning, but no year bird.

And so at 5am on Tuesday I made a mad dash from the house to the car in the darkness and through a torrential thunder storm (what a way to start a day).  Many of the roads out in East Hampton were flooding and that, and the morning NYC-bound traffic crush, made it a slow slog to Huntington, but I got there at just about first (birdable) light.  There were plenty of ducks in the harbor but, as the light got better and I could see further, I could tell that none of them was a Tufted Duck.  Not long thereafter I was joined by Corey Finger and Mike Schiebel and we continued to scan the area hoping that the duck would pop up.  Mike remembered being told that the duck spent time around some floating docks to the South of the overlook and, almost as soon as we turned to face that direction, Corey saw the bird come drifting out from behind a dock and start preening not 50-yeards away from us.  TUFTED DUCK (NYS 2012 #360).


Tufted Duck is a species that I remember being much more regular in New York 15+ years ago when they showed up annually on the East End and even in Central Park.  These days though they are scarce on Long Island and so I had wondered whether one would show up before December 31st.   A big thanks to Brent Bomkamp for finding the bird and getting the word out yesterday. 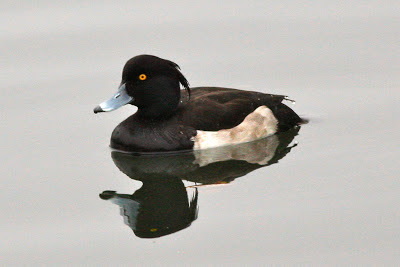 So back to Northwest Harbor, stopping to pick up breakfast, and to a day of pre-Christmas shopping, tree-decorating, etc.  I have feelers out for the exact location of the Black Rail but I'm not terribly hopeful of picking that needle out of the very big haystack that is Southern Long Island.  I will absolutely try for Black Guillemot again though ….