When I first bought the house in NorthWest Harbor six years ago one of the first things I did was to establish a feeder station and hang a bunch of bird-boxes and bat-boxes.  In fact the bird-boxes went up before most of the furniture was delivered.  We've had a very mixed record with both, attracting Eastern Bluebirds, Tufted Titmice, Black-capped Chickadees and (unfortunately) House Wrens to the bird boxes but have yet to have bats use their custom-built homes.  That's not to say that mammals don't use the boxes however as I frequently find White-footed Mice in the chickadee box and gray squirrels took over the owl box as soon as we hung it up.  I suspect if we found a large enough box we could get Raccoons to move in too but I think we have quite enough trouble with them already.

Two years ago, in an effort to actually see the Eastern Screech-Owl that we so often hear in the yard, my partner Ryan hung an additional three owl boxes in likely looking spots.  For the first year or so we diligently checked them and changed the sawdust as instructed but, as so often happens, they soon got left to their own devices.

Then yesterday afternoon, a lovely mild day after a freezing couple of days out here, I happened to glance out the kitchen window and noticed that the black entrance hole on the front box was missing (the entrance hole usually stands out from a distance).  Now I've been fooled before, thinking that there was an owl in a box only to grab bins and see that the hole had been stuffed full of oak leaves by a squirrel.  This time though, there really was a Screech-Owl in the box, and a red-phase owl to-boot. 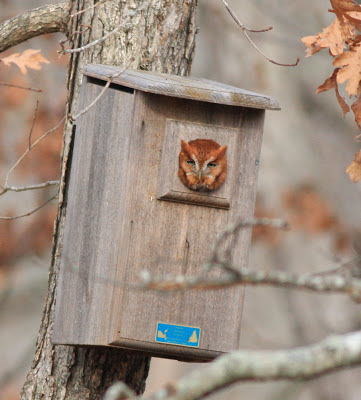 The owl seemed to be enjoying the weather and popped up a few times that afternoon.  While it watched us when we were in the driveway it didn't seem all that concerned, but then again it's probably watched us many times from various roost sites without us knowing.  Although I tried to stay focussed to see it fly-out, other things distracted me and I missed it.  Still, hopefully it'll be around for a while so I'll have other chances ...
Posted by Welsh Birder Abroad at 10:34 AM