So I guess that every Big Year has a bogey bird (if you're a Brit) or a Nemesis Bird (if you're a Yank) and mine for this year was shaping up to be Brown Pelican.  My mid-November I was pretty sure I'd missed this bird even though I'd been looking for this species since May.

Brown Pelicans aren't really all that rare on Long Island and some years they can be relatively common.    Last year for example Hurricane Irene pushed a bunch of them up to the Island and they sat around on docks and jetties for months being generally easy to see.  This year though there was no Summer hurricane and so no Summer pelicans.  There were a few records of birds seen by sea-watchers in May and then just a couple of records of day-trippers from New Jersey that showed up in New York waters, fed for a few hours, and then hightailed it back South.  There really were only two sightings that were 'chaseable' but on both occasions the birds showed at the West end of the Island when I was at the East end.

Now I sea-watch *a lot* - often two or three days a week - and all Summer I was out on a fishing boat or a whale-watching boat at least once or twice a week.  That's a lot of time looking at the water around the Island so, as one-by-one the other birders on Long Island all got their pelican (and I didn't), the word of my Nemesis Bird started to spread.  By the Fall most New York birders knew that I was missing this species and it had become a bit of a running joke in the New York birding community.

So by October I started to run the 'Pelican Route' Out East almost every day I was here - a sequence of spots that pelicans tend to roost when they are in the area (Sammy's Beach, Cartwright Shoal, Lazy Point, Fort Pond Bay, Duryea's Lobster Dock, West Lake,  and East Lake in Montauk).  If I was birding in Montauk, or even going out to lunch, I'd run the route on the way out or the way back.  I figured that if a pelican did show up then I'd at least have a shot.  But no pelicans ....

Then came Hurricane Sandy and it did produce a pelican (!) - but only for Shai Mitral and Pat Lindsay who saw one from Orient Point on the North Fork.  I was on the South Fork that day.

By November I was starting to loose hope but I did keep running the Pelican Route three or four times a week; I'm stubborn, what can I say.  There were also still some pelicans around in Massachusetts and Rhode Island but one by one, they ended up with wildlife rehabbers, getting fed up and shipped down to the Carolinas.  One even showed up tangled in fishing gear near Shinecock, and it too ended up getting a free ride down to North Carolina in the back of a station wagon heading to a family Thanksgiving.  And so I'd pretty much given up on the species as we headed into December and then on Thursday I heard third-hand of a pelican report from Montauk. 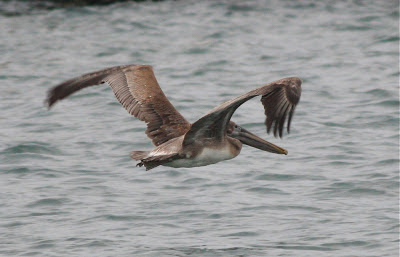 At this point it almost feels a little anticlimactic.  I've spent so many hundreds of hours looking for this species that to have seen it feels a little unreal.  There's almost a sense of loss if that makes any sense.  So I guess I'll need a new Nemesis Bird .... how about Pink-footed Goose?
Posted by Welsh Birder Abroad at 3:24 PM