I have to admit that I was very, very happy to see this bird yesterday.  I have a terrible history with this species having chased them numerous times in New York and New Jersey but not once before yesterday had I been able to lay eyes on one anywhere on the East Coast.  I did see/hear a couple once on breeding territory in Minnesota but, given the Big Year, I really hoped to get one in New York this year so I could kill off another local nemesis bird.

Things hadn't worked out so well so far this year though and, although I chased after a LeConte's Sparrow in Brooklyn, and another one that was seen by many near Ithaca, I missed them both.  While I certainly hadn't ruled this species out, I really wasn't expecting to get one this late in the year, so when Corey Finger called yesterday and asked how long it would take me to get to Queens, I was pretty psyched.

As usual when these calls come in, I was at entirely the wrong end of Long Island and in this case I was birding at Napeague and enjoying a nice slow day poking around the marshes counting sparrows.  A LeConte's meant I was definitely going to run West though so I slogged back to the car and set a course for Queens, dreading what can sometimes be a long and painful run in traffic.  On the road I got some photos from Corey via text and the ID certainly looked good, at least as far as I could tell from glancing at iPhone shots Corey had taken of the screen on the back of his camera.  And mercifully today the traffic actually cooperated so I drove up onto the Edgemere Landfill at around 12:15pm (after a quick two and a half hour drive) and saw Corey and Andrew Baksh standing out on the grasslands.

Looping around to where they stood I was treated to close-up views of a very cooperative LECONTE'S SPARROW (NYS 2012 #359) skulking about in a weedy ditch.  The sparrow popped up a few times within minutes of my arriving and allowed great looks and some decent photos - remarkably cooperative for this species (no spishing required).  None of us had actually seen many LeConte's before (I'd seen only 2) so we spent a fair amount of time noting, and discussing, field marks.  We worked through all the other Ammodramus sparrow species and eliminated them one-by-one while having the luxury of being able to continually refer back to a text-book LeConte's that kept popping up, sitting out in the open, and giving beautiful views.  When I think about all the miles I've walked through grassy fields in search of this species, it's amazing just how easy and cooperative this bird was. 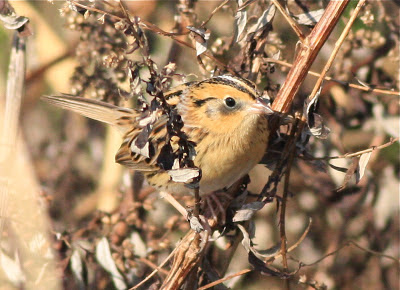 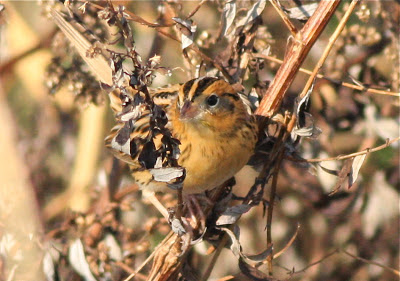 There was a problem though.  The status of access to the Edgemere Landfill is apparently less than clear, and while I had just driven in and tried to look as though I was supposed to be there, it wasn't clear that the site was readily accessible, especially if birders started showing up in numbers.  The Queens birders were understandably nervous about getting birders shut out the day before the Queens Christmas Bird Count so made the decision to delay announcing the bird.  Oh, and apparently there's also a problem with wild dogs (!).  Corey discusses the dilemma over at 10,000 Birds 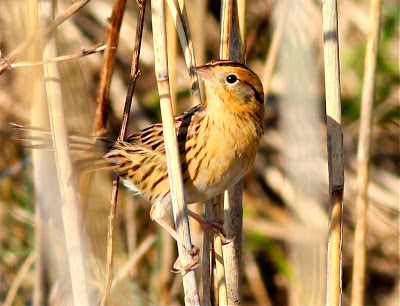 Still, controversy aside, it was a terrific bird and I was very grateful for the chance to see it.  So what's next?  360 would be a very nice number for a New York State year list ....