A Day Off in Central Tokyo

Just back from a business trip to Asia which included visits to Tokyo, Hong Kong, and Singapore.  The trip was spread over several weeks so I was able to grab at least part of one day in each city to go birding.

I have a tradition in Tokyo - fly on Friday night, arrive on Saturday night, and take the Sunday off to recover from jet-lag before heading to the office on Monday morning.  I've been to Tokyo 19 times in all, and I've quite often done the same thing on my free Sunday mornings.  I like to start my trip with a visit to the Meiji Shrine, an active temple set in a beautiful block of mature woodland in Central Tokyo.  The locals go for religious reasons or to view the iris garden in season, I got for the birds. 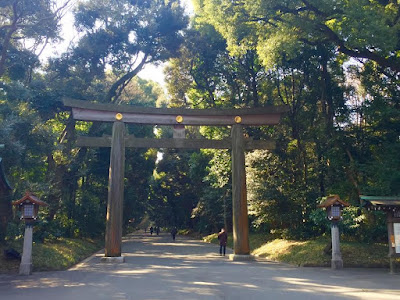 Arriving at the shrine, I started to re-familiarize myself with the local birds and bird calls.  In Tokyo, two species are absolutely ubiquitous and their calls are constantly heard in or near any patch of green.  Large-billed Crows and Brown-eared Bulbuls are the 'sounds of Tokyo' for me and sure enough, with were creating quite a racket as I came into the park.  Putting them aside though, I started to work my way around the paths looking for the good variety of woodland birds that Winter there and soon started to pick out some better things.

Among the regular birds at the Meiji Shrine, Japanese Tit, Long-tailed Tit, Japanese Pygmy-Woodpecker, and the local specialty Varied Tit work the canopy while Dusky and Pale Thrushes shuffle around in the leaf-litter.  I was also able to pick out a Japanese Brush-Warbler, a Red-flanked Bluetail, a Brown-headed Thrush, and four different individual Hawfinches, a personal favorite.  In all I saw 24 species of birds in a couple of hours of wandering the trails.  Not a huge list, but some nice things and a very pleasant start to my Asia birding adventure.

Perhaps the best bird of the day took me a while to log on to.  As I walked the paths I kept hearing a loud 'key-kek-kek-kek' call and couldn't for the life of me think of what it might be.  Some sort of woodpecker perhaps, it just didn't sound right, and yet the call was oddly familiar - I knew I'd heard it before somewhere.  The mystery was solved after about half an hour when a male Northern Goshawk flew in front of me and perched, somewhat backlit, above the path.  Felt a bit slow for not realizing sooner, but it was a real pleasure to get up close and personal with a species that I usually see only as a 'zoom-past' in the North woods.

Finishing up at the garden mid-morning, and really enjoying a beautiful Spring day outdoors I decided to keep birding and walked several miles, doing a complete circuit of the Imperial Palace Moat.  Another beautiful spot, this one with picturesque stone fortifications, sculptural pine trees and a shallow moat stuffed with waterfowl.

The majority of the ducks were familiar Eurasian Wigeon, Common (Green-winged) Teal, Tufted Ducks, etc.  but there was a distinct Asian feel from species like Eastern Spot-billed Duck and Falcated Duck. 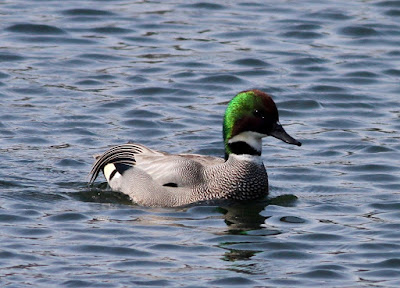 Given the amount of time I spent there I also bumped into a few land birds, perhaps the best of which was a soaring Eastern Buzzard and a surprise Bull-headed Shrike feeding on the grassy banks of the moat.  A beautiful day and a really nice mix of birds, although my feet were killing me by the time I got back to the hotel that evening.  Worth it for the great birds though ...

On this trip, the office and the hotel (Palace Hotel, Tokyo) were actually both right next to good birding spots, and given the odd routine of an Asia  business trip (which often involves being on conference calls in the middle of the night) I was able to grab a half hour in one of the local parks on the way to and from the office.

Hibeki Park is a very typical Japanese urban park in that every square inch of the place is used.  The park isn't large but it contains several restaurants, children's play areas, sports areas, tennis courts, etc.  On the plus side though, it also contains several ornamental ponds and some garden areas that seem good for birds.  Even on a quick visit I was able to add Little Egret, Common Kingfisher, another Red-flanked Bluetail and a Daurian Redstart, all good urban birds.

Another odd morning with conference calls at 4am and 5am but then no scheduled meetings until 9am.  Making the most of the gap, I grabbed a cab and rushed over to the Hamarikyu Gardens (a former Imperial duck-hunting preserve) only to find that it didn't open until 9am (argh!).  With an hour to kill though, and no cabs in sight, I wandered over to some nearby piers that gave me a view of Tokyo Bay.  This oversight on my part actually produced the best bird of the Tokyo visit as, while scanning the bay for grebes and ducks, I came across a gull roost that had a really great mix of species at close range.  There were probably about 100 gulls on this little breakwater, about 80 of them were Black-headed Gulls but there were also Herring (including some 'Vega' Gulls), Mew, Slaty-backed and Black-tailed Gulls in the mix.  There was also a very small gull sitting in a row of Black-headed Gulls.  At fist I thought this bird was a Little Gull, just based on the size difference, but it didn't look quite right somehow not 'cute' enough, the black bill seemed too big as well.  The plumage, absent the bill looked just like the Black-headed Gulls around it, but the size was so obviously different.  As I walked away to head back for my meetings I was still thinking Little Gull, but then the 'penny dropped' ... Saunders's Gull!  A life bird for me, and something I just wasn't expecting to see.  A great way to end the Tokyo portion of the trip.


Posted by Welsh Birder Abroad at 4:39 AM