This being a 'Redpoll Year' Hoary Redpoll was perhaps the last year bird that I was reasonably confident of seeing before December 31, 2012.  My eBird Needs Alert (if you don't have one, get one) has been popping up Hoary Redpoll sightings for weeks now but I have been waiting for birds coming to feeders before I made one last slog up to the North Country for perhaps one last year bird.

The undisputed king of redpoll feeding is a chap called Larry Master who runs literally dozens of niger feeders (not to mention Flying-Squirrel, Golden Eagle, and Fisher feeders) at two sites near Lake Placid in the Adirondacks.  I've kept in touch with Larry for the last couple of months, and although he's had a few good redpoll sightings, the mild weather has made the redpolls a hit-or-miss thing and less than guaranteed.  So when he emailed me yesterday, in the midst of 18-inches of fresh snow in Lake Placid, to say that things looked good for redpolls, I quickly planned one last trip Up North.

Leaving NYC at 4am I made good time and rolled in to Lake Placid, after a quick stop for a roadside Northern Shrike near the Olympic Ski-jump Center, about five hours later.  Heading over to Larry's house I met his pack of friendly dogs, and his gracious wife, and was ushered into Larry's living room where Derek Rogers was already watching a set of feeders through a picture window.  There were certainly redpolls around, in fact a flock of about 90 redpolls was milling around the treetops in the yard but seemed reluctant to come to the feeders.  So we waited and watched, and slowly the redpolls got more confident and came down to the trees around the house.  On their second visit, Derek spotted a redpoll that stood out as obviously white in a flock of buffy-beige birds.  Even with the naked eye this bird popped out of the flock so we struggled to get better looks through bins and I took some distant record shots.  Undertail coverts looked good ... rump looked good ... bill looked good ... and the overall coloration and structure of the bird all seemed right for Hoary Redpoll.  This particular bird just wouldn't come down to the feeders though and even though we all three got decent looks I wasn't able to get a great photo.

Soon thereafter Larry's children and grandchildren started arriving for family Christmas things so Derek and I tried to make our excuses.  Larry, being the most gracious birding host offered to show us his other feeders and so we convoyed over to his 'farm' in the 'Intervale Lowlands' to check out dozens more feeders and another crop of birds.  There were American Tree Sparrows, Red-breasted Nuthatches, a few Hairy Woodpeckers, and Larry showed us a pile of deer carcasses designed to lure in Golden Eagles.  Before long I picked up a small group of Bohemian Waxwings, a state bird for Derek and then we settled in to watch the local redpolls in the hopes of another Hoary.

The redpoll flock here was quite flighty and moved around a lot, but even in the distance, Derek and I kept zeroing in on a particular bird that looked really good.  Derek, using his new iPhone digiscope mount thingy, was able to get some good shots and when we looked at them later, it was pretty obviously a female Hoary Redpoll. 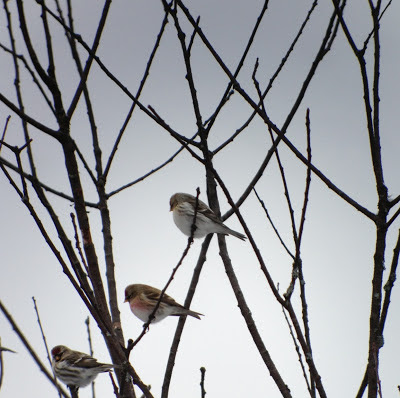 So 'mission accomplished' so to speak - HOARY REDPOLL (NYS 2012 #361), I decided to head South for the 5+ hour drive back to the City.  On the way back I got a constant stream of texts from Derek who, with his girlfriend and other family, was staying in the area for the holidays.  First he had a Northern Shrike, and then he had a perfect male Hoary Redpoll.  I'm not jealous ....